Nicole and the map

Here is where our turtles are: I have found it difficult to post these maps of late. The process itself is the same, of course. But I used to send the links to my friend Nicole. She was one of those people who was a marine biologist not by training, but by nature. Her deep connection to the ocean was knit into her soul.

There are many things to know about Nicole, but one is that she had a marvelous laugh—the kind you could pick out because it was uncommonly lovely. Her laugh was like a sentence—a bit of happiness standing on its own in the conversation.

Nicole often laughed when we told her about what the sea turtles were up to—not because she thought what we said was funny necessarily, but because she was truly delighted by the turtles. She innately understood the wonder of them. She was always interested in the scientific details of our research, listening and nodding and asking questions that made us think.

Our friend Nicole died of leukemia just over two weeks ago. She was only 36, with a beloved husband and two little boys at home—and a raft of family and friends now navigating the complex currents of grief.

I have thought about many things since Nicole died. One thing is how our Canadian Sea Turtle Network is made up of so many people. The people on our office team. Our volunteers. The fishermen who work in the field with us. The sea turtle researchers around the world helping us. The many people who kindly fund us. And people like Nicole, whose hearts hold space for this work that we do. Who laugh, awed and delighted by the ocean and the turtles. Who help to make us stronger and more creative. Who listen and watch and read.

Turtle tracks are back!

Here is where our turtles are today: 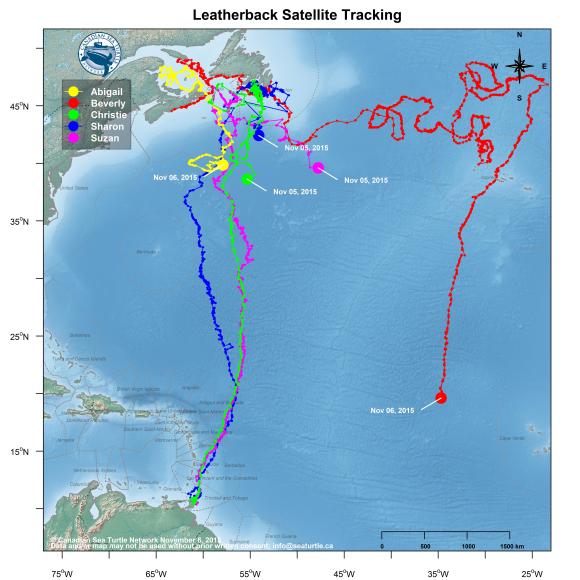 In great news, the Canadian Wildlife Federation will be highlighting the tracks of four of our leatherbacks in an initiative called The Great Canadian Turtle Race, which they launched this week. It’s terrific coverage for sea turtles from an organization that is passionate about conserving wildlife in Canada. We’re really excited about it!

Back at the office

We’re gradually settling back into office life, packing away equipment and painstakingly transferring information from our field sheets to our database. Our sea turtle field season is over, although there are still leatherbacks and loggerheads swimming in Canadian waters. The leatherbacks will start heading south over the next month, instinct sending them towards the nesting beaches of Florida, the Caribbean and South America. (Unless, of course, they are Beverly last year, who decided staying north and travelling east made more sense. Remember this and this and this?!)

Here is a look at where our satellite-tagged leatherbacks are these days: